Join Ben to explore history, current events, and the many creative ways humans tell their stories. Ever wondered what life was like in early civilizations? Have you thought about where your ancestors lived and who lived on this land before you? Are you looking for ways to write down your feelings, thoughts and ideas? Find out what’s happening in the world around you, and how to write about it in Jr Humanities. Writing not your thing? – Ben has an idea for that! He will work creatively with students in this course to express their ideas in a format that best suits them and shows their learning. 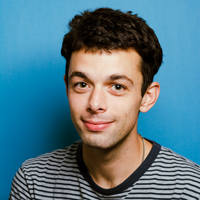 Ben Stephenson is an internationally published author and artist, originally from New Brunswick. His first novel, A Matter of Life and Death Or Something (Douglas & McIntyre, 2012), was nominated for the IMPAC Dublin Literary Award, translated into Spanish and Romanian, and prompted CBC Books to name him one of ‘Ten Canadian Writers to Watch.’ He earned a Bachelor of Fine Arts from NSCAD University, and a Masters of Fine Arts in Creative Writing from UBC. He has taught various art and writing workshops, and he helped to build Word Wrestlers, UBC’s creative writing summer camp for kids. As a teacher he emphasizes the value of experimentation, imagination, collaboration, and play, and loves learning alongside his students and stoking their natural curiosity. In his spare time you’ll find him making books, cooking, drawing, watching the Toronto Raptors, and skateboarding. His most recent book is a self-published collection of stories called Good Dog.

What are the dates?
All year: September 7th- June 17th

To be eligible for credit for this class, students must be enrolled in an accredited distance learning program.
For full details on our cancellation policy, please our Payment & Cancellation Policy page.
Sign up